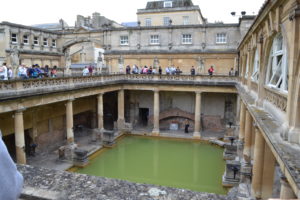 On Saturday we went to The Roman Bath. It is a museum that has more than one million visitors every year.
There are three hot springs, The biggest is The Holy Roman spring, the water comes from three thousand meters under the ground. The water has fourtythree minerals and the water is hot it is fourtysix degrees warm.

In the year fourtythree after christ the Romans invaded England.  They built The Baths. The Baths had two purpose, It was used as holy  well to a god and warm water to the baths.  When the romans went away the Baths fell in and was forgotten.  In the 1100s a pool was built for health and swimming.  In the 1700s it became popular to drink the water from the spring. A lot  of rich people came to Bath and a lot of new houses for example the
circle and The Royal Crescent. 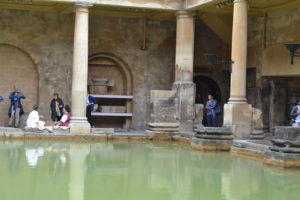 They have a big exhibition where you can see old things from the  Roman Bath for example old coins parts of the old houses.  There were small models showing what the baths looked like.  I think at The Roman Bath was interesting but there was so much to  learn so it was hard to remember everything and i think that whole trip  was very funny and I have learned a lot. The group has become closer  and now we know each other very well.